The poetry you see here reflects
over three decades of work. I have
changed over the years as you have.
If you want to see what I write
currently, visit:
http://simplyhaiku.theartofhaiku.com
I love and appreciate you all.
Robert D. Wilson
foamfish@gmail.com

Anyone wishing to have a FREE electronic copy of my book of hokku, haiku, and tanka, Jack Fruit Moon, can contact me via e-mail, to request a copy. 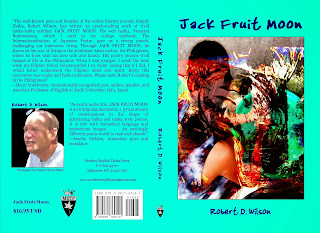 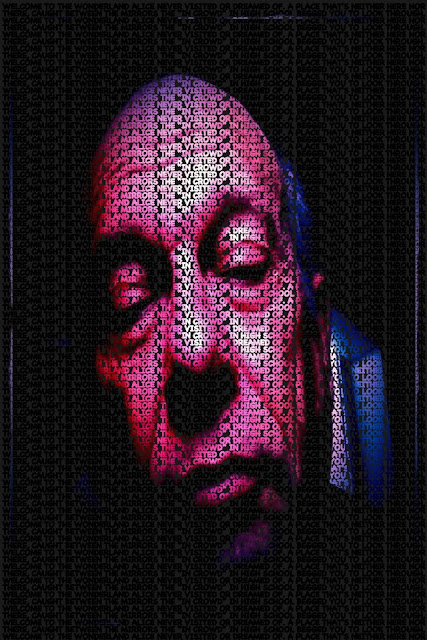 treading stillness . . .
the alley cat, and
the mouse

Wilson is the Co-Founder and Co-Owner of Simply Haiku, the literary journal that has, in its tenure, changed the course of haiku and related genres worldwide.  Uncompromising, Wilson follows his heart and won't be bullied by the good old boys and girls of any genre.  He's hated by who he calls "the blank faced timex watches who want the same old, same old . . . " and respected by those with good self images and self winding brains

Robert D. Wilson seeks no fame, money, or an arena.  His banner cry is literary integrity.  A small-minded band of pirates tried to close Simply Haiku down via mutiny and lies a few years ago, behind Wilson's back, while he was recovering from an illness: Carol Raisfeld, Ray Rasmussen, Johnye Strictland, Micheal Rehling illegally announced to the online world that Simply Haiku had shut down its doors and proceeded to thank Wilson and others for their contribution to Simply Haiku.  They forgot that Wilson had been named as Simply Haiku's owner or co-owner on its cover for almost a decade.  One of the mutineers even had the audacity to write Wilson and demand that he give Simply Haiku to him.  Wilson told the pirate to "take a flying leap!"

Wilson, raised by his father to rise up against adversity and be a scrapper "alley cat," with the aid of his best friend and sister, Sasa Vazic, kept Simply Haiku alive, and today its readership has doubled, which tells you the value Simply Haiku has in the hearts and minds of people who want to rise above the morass and truly understand, fathom, and compose quality haiku and related genres. 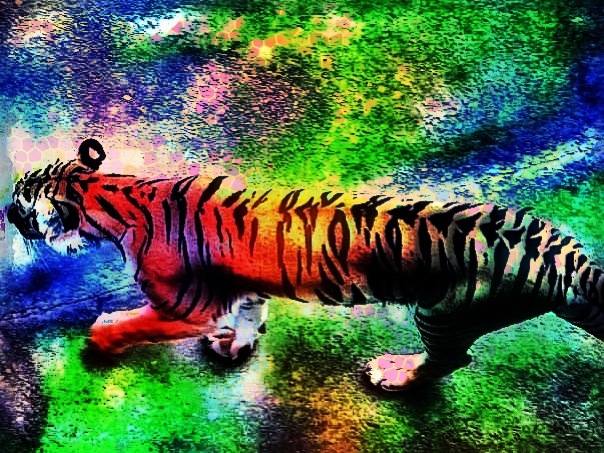 A depository of poetry, poetic prose, and artwork built up over 3 decades.

"Contained in Lousy Mirror, is the poetry I have composed in the past three and a half decades, for good or for worse.  No hold barred.  It is a record, therefore, of this poet's growth. Pure and simple.  I am always honing my creative output. I have not arrived and will never arrive."

The format and style of Wilson's poetry has evolved over the past 3 decades. The metrics and style therein do may conform to what the author espouses today as haiku, tanka, etc. It is a record, a snapshot of the poet's mind. 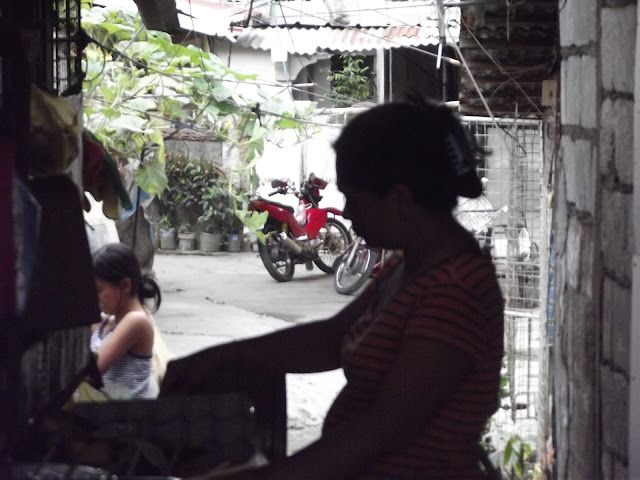 mirror, mirror
on the wall, whose reflection
parrot's time?


a woodsman's
grip, the stillborn
darkness of
a marmot's winter
pushing ice cubes 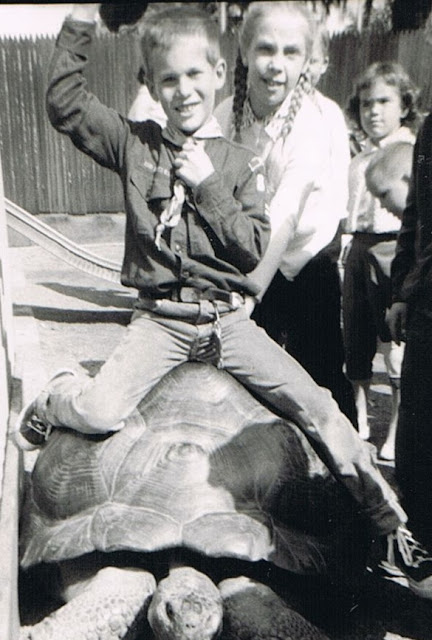 she sleeps in
a bed scattered
with leaves

a house to
mosquitoes and rats?
spring dreams!

I listen
to autumn speak
through waves . . .
thinking of young girls
birthing in shanties

your roots, tree,
clasp the wall behind
you, shielding
candles from the
dredges of winter

speak to me,
flame, from your child's
candle . . .
assure me that death
is more than a word

late for work?
spring tiptoes past me
in a hurry

where are you
at night when light
exists in
cemeteries
and empty captions? 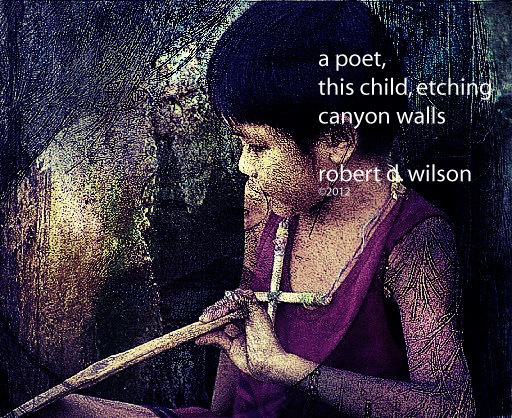 stay with me,
dragon, another
night . . .
tie-dying sheets
into curtains

marmot . . .
the trees you dream
have no leaves

the waterfall
in your eyes, and the
spring that wasn't

in a dream,
the thin legs of
an egret . . .
glued to dry mud like
a postage stamp

am i
missing something,
shotetsu?
words in any order
floating in stale ponds

spring rain . . .
not enough words
for a haiku

When the winds
wither, and the canyon
stares at me
with deep set eyes . . .
a heart breathing song

shall we . . .
swim with catfish
through the moon?

twilight dawn . . .
my heart dangles from
a rope bridge
grateful for the
absence of wind 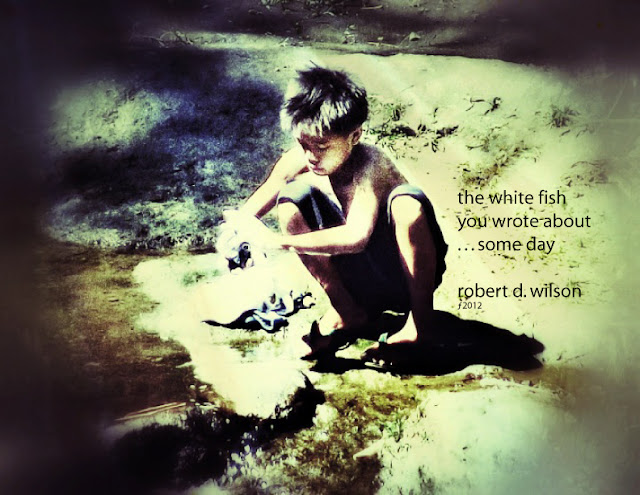 whispers
between the banks
of this river . . .
a buntis woman's
water breaking

dawn waits
for me in the cafe . . .
eating noodles

twilight dusk . . .
i ask rice fields to
bend over
like baklas in a
comedy bar CR

even in
death they want to
quiet me . . .
this stream without
a voice in winter

the sun smiling?
or another crazy
man's dream? 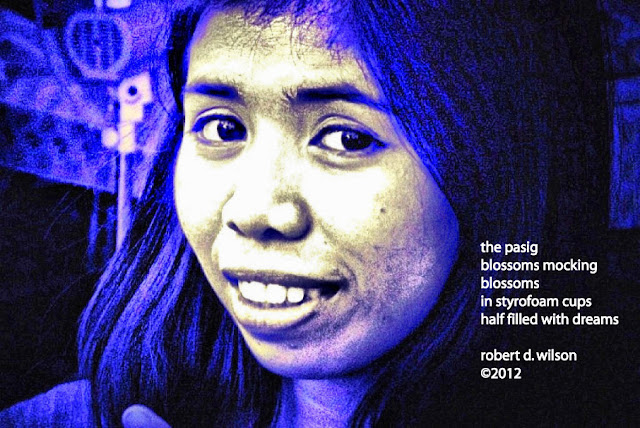 and you, tree . . .
white washing treetops
with now

i know, a
tilapia swimming
through me . . .
in  a poem ban'ya
calls a haiku

cradling
a marmot's head . . .
in winter

stop the world
i want to get off . . .
stretch my
song into counter
melodies and moans


me night after night

why do you
walk through me
tonight like
a bakla singing
tagalog love songs?

your voice, girl,
could have been a
spider monkey's

an egret
crosses my wife's
rearview mirror
into another
drivers caption 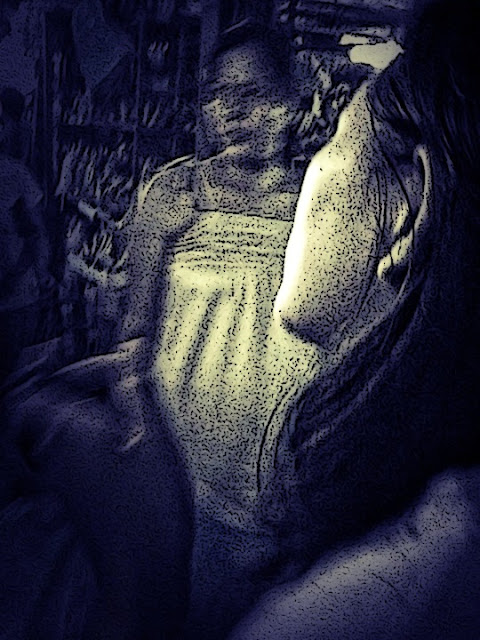 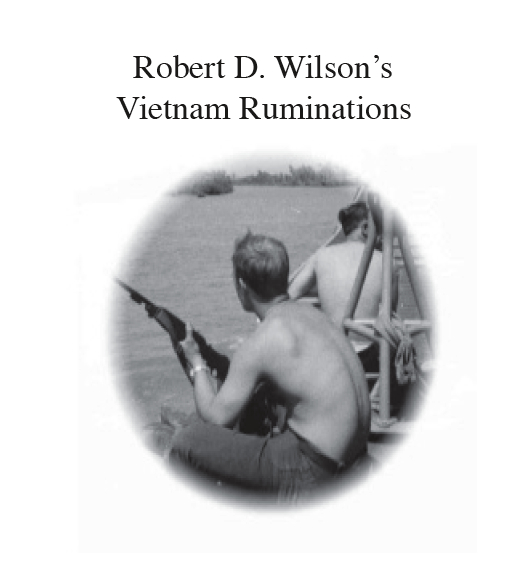 My mother bore down, pushing me into this world on the 13th of May, yes, a Friday, at 9:30 in the morning, grimacing, cursing, reminded every second that my path and hers will be forever entwined in a cosmic circus tent filled with mirrors donated  by big business, the John Birch Society, and an infinite number of posers insisting that Van Gogh painted by numbers.

twilight dawn . . .
a catfish with his
mouth open 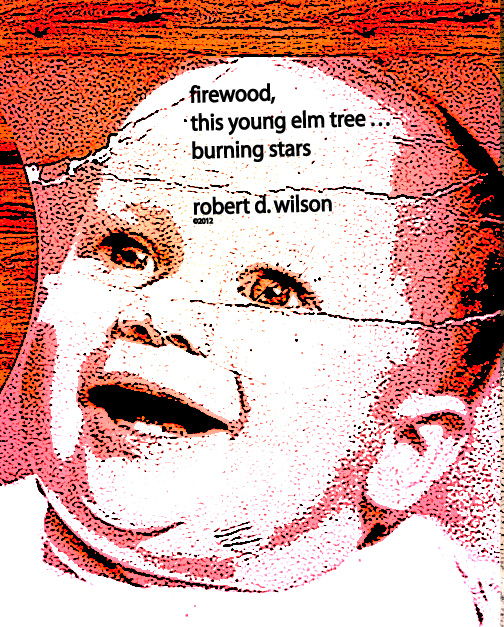 I grew up in middle class, never lock your front door, America, when Norman Rockwell wore under-roos, and every parent sounded like Homer Simpson.  Barry Goldwater signs made love to manicured lawns; Susie Creamcheese was the school slut; and milk bottles were still delivered to your front door. War was a John Wayne shoot-em-up we watched with our dads, who yelled out, "Kill the Japs!" Shoot the Krauts!" "Hangem by the balls!"

On weekends, we played sports: baseball, football, basketball.  Afterwards, we ate t.v.dinners in front of small screen television sets in the belly of the MGM lion.

Never in our wildest imaginations did we think we'd some day face the invisible fire of young men and women, even children, programmed  to "Kill the Americans!"in the dawn's early light.

Boating upriver
into a dream saved
for nights like
this, when alice sets
fire to wonderland

All of us stationed in Dong Tam at some time or another were assigned to river patrol. This entailed navigating narrow, brown water river-ways in Vietnam's Mekong Delta through dense vegetation, partially obscured villages, and blind turns. We knew we were being watched. It was impossible to ascertain if the villagers we passed were for or against us. The enemy didnʼt wear uniforms.

Most of the time, these forays were uneventful. Sometimes, when we least expected it to, all hell would break loose, descending us into the bowels of a dragon mirroring Danteʼs Inferno.

While some of my friends in America were living the good life: cruising the boulevard, surfing, attending concerts, dancing, dating, and working towards goals, I was in a jungle on the other side of the planet, dancing with Alice in the Wonderland Amusement Park.

I remember the wisps of air shooting past me like gnats as if it were yesterday. Only it was 44 years ago, and I was an 18 year old sailor serving my country on a small base in the Mekong Delta region of the former Republic of South Vietnam in a war that would change my life forever.

My father went to war.  My mother's father, before him. We were taught to love our country.

We saw America as a beacon light of freedom that could do no wrong.  We had freedoms enjoyed nowhere else on the planet. It was out duty as soldiers and as Americans to protect these freedoms here and abroad, keeping the commies at bay.


Vietnam was a domino.a boot shaped country under siege by communists. If it fell, other countries would fall, one after the other.  Communism was barking at our back door.  To preserve America's freedoms, we had to do what we had to do:

risk life and limb like our ancestors did, on a foreign shore.


No one told us that Firestone Rubber, Shell Oil Company, and other Western business interests had huge holdings in the Republic
of South Vietnam . . . or that 90% of the world's tungsten was on her shores.

No one told us that this tiny, remote country in Southeast Asia was ruled by a heartless psychopathic tyrant who didn't hesitate to


murder someone who practiced the freedoms we practiced in America. 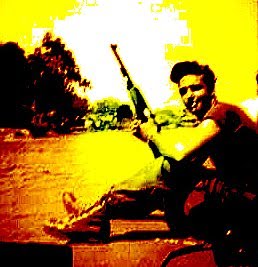 endless summer . . .
a shadow pretending
to be a god

We fought a war in a country we knew little to nothing about. South Vietnam was not in our high school textbooks; and there was no Discovery Channel introducing my peers and I to exotic cultures. We were, in essence, the personification of  Robert Heinlen's book, A Stranger in A Strange Land.

A poor country ravaged by a thousand years of war, corruption, and military dictatorships, many South Vietnamese people living in the cities wanted to be delivered to the promise-land they'd heard about in the news.

American soldiers were looked upon as saviors by many Vietnamese people. We were the embodiment of the life theyʼd dreamed of. Many naively thought weʼd win the war and turn their country into a miniature United States. We were not saviors, however, and we did not transform their countryʼs economy into a likeness of ours. Neither did we win the war. Bowing to political pressure in the U.S., our Armed Forces deserted the South Vietnamese people. leaving in their wake a bloodbath for those who supported our country and the dictatorship weʼd helped place into power and supported. 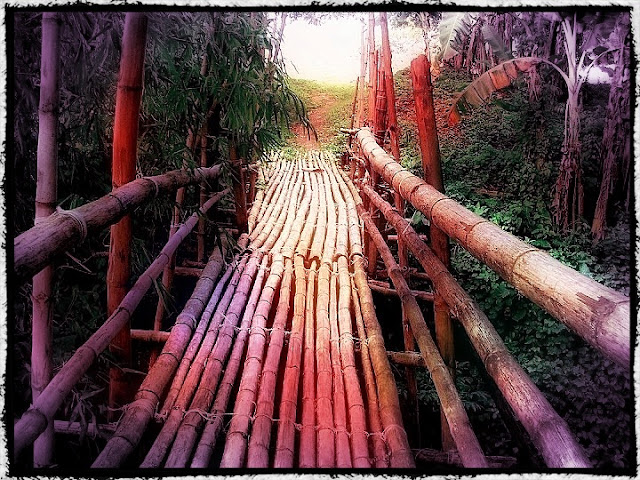 Quiet . . . nothing moved, breathed, or thought . . . a carnival of anticipation, spirits clothed in ashes, painting yesterday with un-calloused fingers no one thought would be decide another's fate.

I was 18 and 19, living in the dragon's belly, unsure of a future that could or couldn't be brought home in a body bag covered with my country's flag.

From high school to hell in less than a year.  What was church, Billy Graham, the Beach Boys, and the Beatles in a world suddenly upended, the moon  on leave from his senses?

"That's all for now.  I finally found the time to put this addition to my archives together. So much to do with so little time. Maintaining and uploading this library, finishing a book on haiku criticism,  facing a deadline for a redefinition of Vietnam Ruminations, that will be distributed free to American troops and their families. by a non-haiku related publishing house. And that my readers and detractors is just the tip off of the proverbial iceberg." 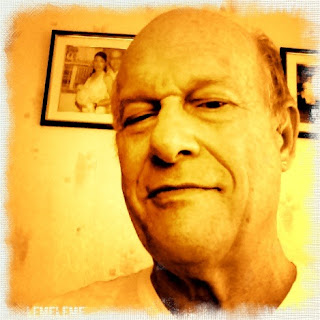 robert d. wilson
somewhere, in the, Philippines
Robert-san is co-owner of Simply Haiku, owner of the Simply Haiku Yahoo forum, co-moderator of WE ARE ALL JAPAN. He is the author of Jack Fruit Moon, Vietnam Ruminations, Tanka Fields, And Sanity Scurried, and Late For Mass. He lives with his wife, Jinky, and famiy in the Republic of the Philippines. He is an avid photographer, researcher, poet, writer, and blue harp player.

A FREE COPY OF TANKA FIELDS!

I am giving all who ask a free pdf copy of my chapbook, Tanka Fields. I believe that poetry belongs to the people and not just to those who can afford to buy books and pay the high S&H costs.

Others who appreciate my poetry and art